What is MDF ?
Medium-density fibreboard (MDF) is an engineered wood product made by breaking down hardwood or softwood residuals into wood fibres, often in a defibrator, combining it with wax and a resin binder, and forming panels by applying high temperature and pressure. MDF is generally denser than plywood. It is made up of separated fibres, but can be used as a building material similar in application to plywood. It is stronger and much denser than particle board.
The name derives from the distinction in densities of fibreboard. Large-scale production of MDF began in the 1980s, in both North America and Europe.

Properties
Over time, the term MDF has become a generic name for any dry process fibre board. MDF is typically made up of 82% wood fibre, 9% urea-formaldehyde resin glue, 8% water and 1% paraffin wax and the density is typically between 500 kg/m3 (31 lb/ft3) and 1,000 kg/m3 (62 lb/ft3) The range of density and classification as light, standard, or high density board is a misnomer and confusing. The density of the board, when evaluated in relation to the density of the fibre that goes into making the panel, is important. A thick MDF panel at a density of 700–720 kg/m3 may be considered as high density in the case of softwood fibre panels, whereas a panel of the same density made of hard wood fibres is not regarded as so. The evolution of the various types of MDF has been driven by differing need for specific applications.

Manufacture
Chip production
The trees are debarked after being cut. The bark can be sold for use in landscaping, or burned in on-site furnaces. The debarked logs are sent to the MDF plant, where they go through the chipping process. A typical disk chipper contains 4–16 blades. Any resulting chips that are too large may be re-chipped; undersized chips may be used as fuel. The chips are then washed and checked for defects. Chips may be stored in bulk, as a reserve for manufacturing.
Fibre production
Compared to other fibre boards, such as Masonite, MDF is characterised by the next part of the process, and how the fibres are processed as individual, but intact, fibres and vessels, manufactured through a dry process. The chips are then compacted into small plugs using a screw feeder, heated for 30–120 seconds to soften the lignin in the wood, then fed into a defibrator. A typical defibrator comprises two counter-rotating discs with grooves in their faces. Chips are fed into the centre and are fed outwards between the discs by centrifugal force. The decreasing size of the grooves gradually separates the fibres, aided by the softened lignin between them.
From the defibrator, the pulp enters a 'blowline', a distinctive part of the MDF process. This is an expanding circular pipeline, initially 40 mm in diameter, increasing to 1500 mm. Wax is injected in the first stage, which coats the fibres and is distributed evenly by the turbulent movement of the fibres. A urea-formaldehyde resin is then injected as the main bonding agent. The wax improves moisture resistance and the resin initially helps reduce clumping. The material dries quickly in the final heated expansion chamber of the blowline and expands into a fine, fluffy and lightweight fibre. This fibre may be used immediately, or stored.
Sheet forming
Dry fibre gets sucked into the top of a 'pendistor', which evenly distributes fibre into a uniform mat below it, usually of 230–610 mm thickness. The mat is pre-compressed and either sent straight to a continuous hot press or cut into large sheets for a multi-opening hot press. The hot press activates the bonding resin and sets the strength and density profile. The pressing cycle operates in stages, with the mat thickness being first compressed to around 1.5× the finished board thickness, then compressed further in stages and held for a short period. This gives a board profile with zones of increased density, thus mechanical strength, near the two faces of the board and a less dense core.
After pressing, MDF is cooled in a star dryer or cooling carousel, trimmed and sanded. In certain applications, boards are also laminated for extra strength.
The environmental impact of MDF has greatly improved over the years. Today, many MDF boards are made from a variety of materials. These include other woods, scrap, recycled paper, bamboo, carbon fibres and polymers, forest thinnings and sawmill off-cuts.
As manufacturers are being pressured to come up with greener products, they have started testing and using non-toxic binders. New raw materials are being introduced. Straw and bamboo are becoming popular fibres because they are a fast-growing renewable resource. 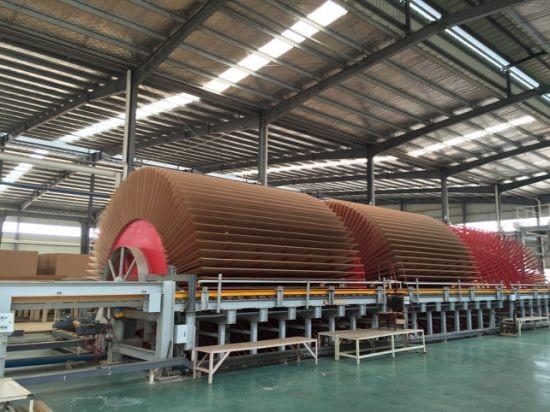 We have strong technical support. There are more than 1000 personnel in CMT, of which 35% are professional technicians. Around 100 are Middle and senior engineer and over 200 personnel own professional registered certificates.

The head office is located in Suzhou, equipped with more than 6 manufacturing bases all over China, spreading from Shanghai, Jiangsu, Zhejiang, Shandong, Shanxi, Heilongjiang. Suzhou CMT is active in wood based panel industry since 2000. Cooperating with the international best partners (such as KADANT, MAIER, GRECON...), to provide the client a high-quality project with reasonable price.

In the last 15 years, we have finished the capacity of more than two million cubic meters of wood based panel factory around the world. Excluding new built wood-based panel production line, CMT also providing the renovation and upgrading service of the whole factory (such as from MDF to OSB, from PB to OSB).

After all these years, our technology and service have been exported to more than 50 countries in the world, especially in Asia, Middle East, Africa and South America, which earns us a great reputation. We adhere to the principle of "Quality first, service-orientation"​ and try to provide the best service. We warmly welcome you to our company and create brilliance together!

Send your message to this supplier
You May Like
Find Similar Products By Category:
Fibreboards
Hot Searches:
Inquiry Cart 0
Contact Us
Inquiry Cart
Back To Top